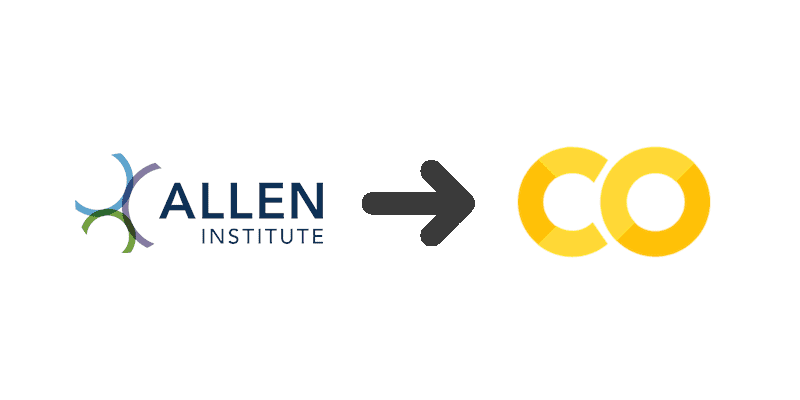 The Allen Institute for Brain Science (Allen Institute) maintains an SDK, called the Allen SDK, for working with their resources (data and services). This notebook, allensdk_on_colab.ipynb, is focused on nothing except the installation of the Allen SDK on Colab.

The following snippets were tested on Colab in new notebooks, for both options available on Colab: Python 2 and Python 3.

Herein, AllenSDK and allensdk refer to the Python package that gets imported, which is distinct from “the Allen SDK” which is AllenSDK plus further documentation, example code, etcetera that can be found in the Allen Instutute’s repository.

This notebook was built out while working through – on Colab – the Allen Institute’s pedagogical Jupyter notebooks in both the Allen SDK and their Summer Workshop on the Dynamic Brain repository on GitHub.

The Allen SDK documentation includes example Jupyter notebooks for how to use AllenSDK.

Separately, the Allen Institute holds an annual two week retreat, the Summer Workshop on the Dynamic Brain (SWDB), where they train up promising new neuroscientist on how to do science with the Allen Institute’s data and tools. The main pedagogical medium in AllenSDK and SWDB repos is Jupyter notebooks, which can be found on GitHub, AllenInstitute/AllenSDK and AllenInstitute/SWDB_2018, respectively.

The SWDB notebooks assume that AllenSDK is preinstalled. That is, in order to get an arbitrary, as-found-on-GitHub SWDB notebook to work in Colab, a !pip install allensdk is required first.

On Colab, a single user is provided a single virtual machine (VM) which has a file system. Both the VM and it’s file system are transient, with a maximum lifetime of 12 hours (supposedly) but they can get killed off in as little as 60 minutes due to being idle (the only persistant info is the notebook itself, stored on Google Drive not the local file system). But for the lifetime of a given VM, the AllenSDK only need be installed once, after which any notebook can import allensdk.

This file makes it trivial to repeat (and debug) AllenSDK installs as needed – which can be rather frequent on Colab. The pip install is just one line of code; the real value here is this text and the collection of debug tools that can come in handy if set-up does not going well.

This notebook reads well enough as one sequential story but the text is really designed to read well as individual snippets, in Colab’s code snippet insert dialog.

To “install” these snippets in your Colab snippets library:

After the above set-up, it’s trivial to insert cells that install and test AllenSDK. For example, load in Colab a SWDB notebook, say BrainObservatory.ipynb, then simply select Insert => Code snippet... and search for allensdk and the following come up: 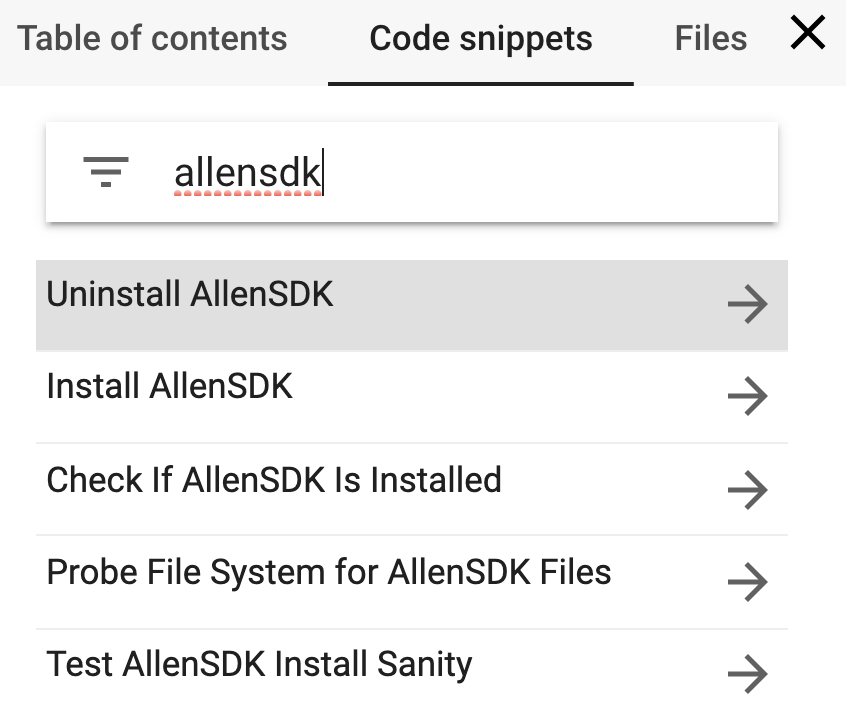 Select Install AllenSDK and run the resulting code cell, after which the Allen notebooks should work on Colab. Your modification will not persist in the GitHub hosted repo’s copy of BrainObservatory.ipynb (i.e. the notebook is in playground mode).

Ergo, these snippets provide a relatively easy way to play with the Allen pedogogical notebooks on Colab, short of forking the original repo… which is one of the things Colab is really useful for.

Installing AllenSDK is pretty trivial and it pulls in a bunch of code not pre-installed on Colab, which does have tons of stuff pre-installed but not the AllenSDK.

TODO: maybe only !pip if detect AllenSDK not installed.

The —yes option works with pip version 7.1.2 and above, and is used here to avoid things hanging at a confirmation dialog (A “Do ya really wanna uninstall all these dependencies?” sort of thing.)

Note that the following sort of sequence can be confusing:

It may come as a surprise that step #4 does not throw a ModuleNotFoundError. Point is AllenSDK was uninstalled but the Python runtime still had classes already parsed into the runtime. Those classes will persist until a runtime restart. So, if you really want to uninstall AllenSDK you might want to consider a runtime restart to really flush out the system. (This issue is true of Python in general; it is not an AllenSDK thing.)

TODO: confirm the above again, with some more testing.

Check If AllenSDK Is Installed (Python2)

Colab supports both Python 2 and Python 3. Detecting installed packages on Python 2 is not particularly elegant but it does the job.

Check If AllenSDK Is Installed (Python3)

Note that this can return a false result if AllenSDK classes were instantiated followed by a pip uninstall allensdk. In that case this test will still report that allensdk is installed, until the runtime is restarted.

Note, if this Python3 code is run inside Python2 notebook, then the result will be ImportError: No module named util.

TODO: Guess this should be enhanced to first check if the user is using the appropriate test version (python2 vs python3). Or maybe even combine both tests into one. That sounds more elegant and foolproof.

From the output of the above pip install is seems packages are getting installed in /usr/local/lib/python3.6/dist-packages (or similar for python2) so might be interesting to see what allensdk related stuff shows up after a pip install allensdk. Two items usually show up, allensdk and an allensdk-0.xy.z.dist-info where x,y,z are digit charters corresponding to the version number installed.

This is a trivial sanity checker to confirm that AllenSDK is installed and working within a machine. This can be quite useful on Colab (and the like) where VMs are getting tossed away on a regular, frequent schedule. Just run this cell and if fetched_data is an array with one more elements and there are no errors, one can assume AllenSDK is a happy camper.

If this next cell throws ModuleNotFoundError that is an indication that AllenSDK is not installed.